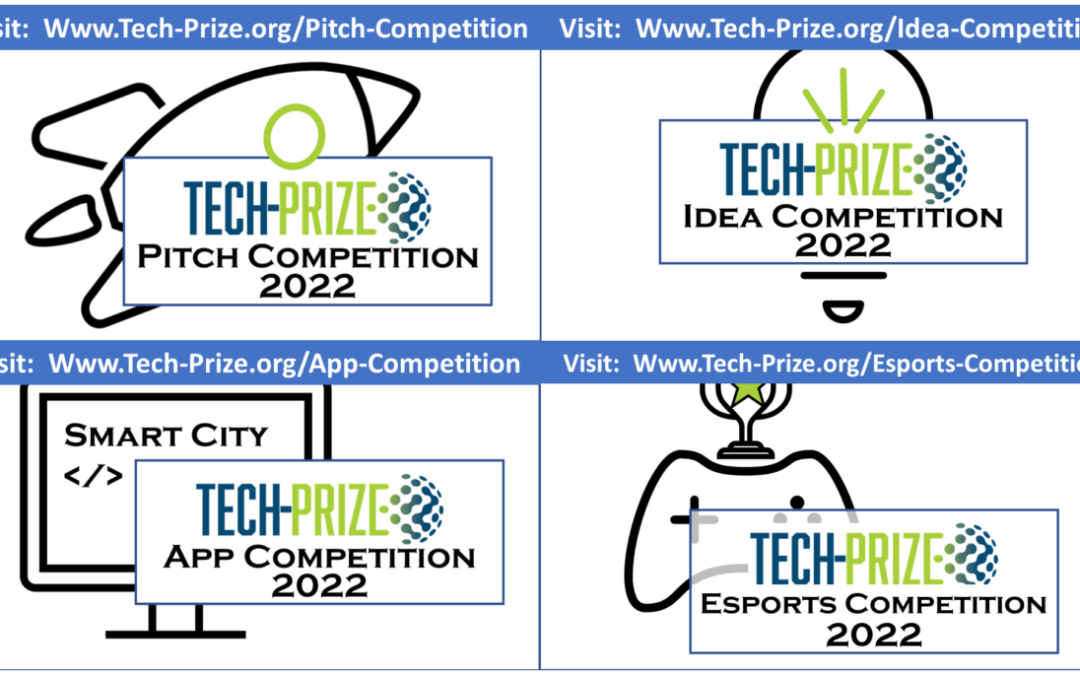 The prizes were part of over $50,000 in cash and scholarship prizes awarded Saturday evening at the conclusion of the week-long Tech-Prize competition.

While many of the ideas in the Saturday Pitch competition to a panel of judges and investors had been in development for a long time, LewisTucker of Beloit said his prayer app, Answered Call, was created in two months with $60,000 he and his wife invested.  The idea grew out of his wife’s work with the homeless and the couple’s desire to create on-line communities, he said. Currently, four churches are testing the app, and 25 more are ready to join as soon as the testing is complete.  He said the app is open to all faiths. “We don’t discriminate. If you have a group and want to pray, we have the app,” Tucker said.

Racine resident Rachel Gage said her Bearer of Health stuffed bear “has a comforting softness to bring a hug to your loved one. It has a weighted base to facilitate video calls to family or healthcare providers.”

REAL School freshman Alex Gonzales won the top $1,000 prize in the Idea competition High School division for a trash-collecting robotic arm that he designed and built.  As with last year, the top prize in the High School division of the idea competition went to a Racine Unified School REAL School freshman Alex Gonzales.  Gonzales, 14, said he was studying to be a robotic engineer.  “Growing up in the Racine/Milwaukee area I have noticed a large growth in trash and pollution in the streets,” he said in his idea presentation, which included a working robotic arm. He said, “With the money I received I will develop this robot and clean up the streets of Milwaukee and surrounding counties.”

Tech-Prize Co-chair Jeff Daniel said Gonzales’ submission was an example of the outstanding submissions by students in this year’s competition.  “It’s outstanding to see the creativity a freshman in high school has generated. He conceived, designed and 3d printed a prototype of a very viable idea. Can’t wait to see what he does now,” Daniel said.

KTECH High School freshman Benjamin Hunter won the top $1,500 prize in the Esports competition High School division for his Rube Goldberg Minecraft Machine that he designed and built using Minecraft.  Hunter, 14, said he was excited to learn about the competition and spent over 2 months working on his creation.  Hunter learned a very difficult lesson about halfway through his development when he accidentally deleted all his files.  “I learned a real lesson about backups!  It was very sad to lose my work, but I was able to recreate it.” Hunter quips.  A video of his Rube Goldberg entry can be seen below.  He said, “I’m looking forward to using my University of Wisconsin scholarship in a few years.  And I’d love to work for Majong (Developer of Minecraft)” he says with a smile.

Tall Oaks Academent Middle School 5th grader Caleb Hunter won the top $1,500 prize in the Esports competition Middle School division for his Rube Goldberg Minecraft Machine that he designed and built using Minecraft.  Hunter, 10, said when he heard of the competition, he immediately thought of using it to tell a story.  “My Rube Goldberg machine retells the 3 Pigs story using Minecraft.  I especially liked how my machine blew up the Stick and Woodhouses, but then the wold gets caught in a specially designed chimney…filled with lava!” Hunter says with a grin.
said he was excited to learn about the competition and spent over 2 months working on his creation.  A video of his Rube Goldberg entry can be seen below.  He said, “I’m looking forward to using my University of Wisconsin scholarship in a few years.  And I’d love to work for Majong (Developer of Minecraft)” he says with a smile.

Other Idea and Pitch Competition Winners

Other winners in the Pitch competition included Dr. Grace Hameister who won the $ 2,500 second prize for Food Fixr, which helps people find foods with specific nutrients known to fight a specific disease fight. Madison entrepreneur Keegan Moldenhauer won the $2,500 prize in the College and Open idea competition and the $1,000 third prize in the Pitch competition, for “Internship on Demand.” which will connect college students and companies with a pre-internship virtual learning experience.

Contestants in the APP competition won scholarships from the University of Wisconsin – Parkside. A three-person team from Parkside each won $4,000 in scholarships for an attendance APP which would reduce the time needed to take attendance and also track if students left during class.

An 8th-grade student from India, Krishna Raghavendran, won a $3,000 scholarship for a learning APP, and also an $850 cash prize in the Idea competition for another app that consolidates medical information to help decision making. In last year’s competition, Raghavendran was one of the top Tech-Prize winners and has taken online coding courses with the scholarships he won.

At a Friday open house, Tech-Prize introduced a new partnership with the Founder Institute Accelerator to help entrepreneurs develop and bring their ideas to market. “This is a very exciting development for our region,” Daniel said. “The Founder Institute is the world’s largest accelerator. They have over 6,000 ideas they have mentored in 200 cities and have raised 2 billion in funding to support launching those businesses.”

Tech-Prize is part of Visioning A Greater Racine’s efforts to improve the Greater Racine community. Racine was once known as “Invention City” and Tech-Prize is working to stimulate entrepreneurship in Racine schools and bring inventors and their ideas to the area in hopes that new businesses will locate here, Daniel said Throughout the year, Tech-Prize sponsors seminars for business development and mentorship for winners in the Tech-Prize competitions.

Information on all the competitions and Tech-Prize is on their website: tech-prize.org